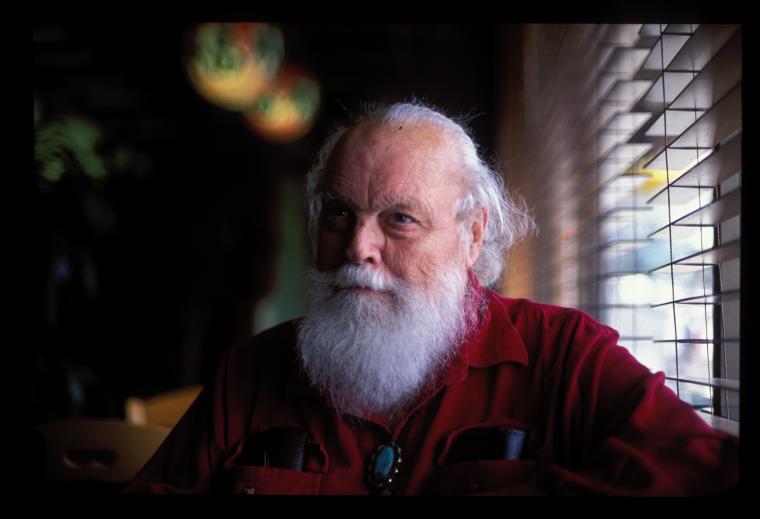 Photo by Eva Soltes
(Bio written by Bill Alves)
Lou Harrison was one of the great composers of the twentieth century - a pioneer in the use of alternate tunings, world music influences, and new instruments. Born in 1917 in Portland Oregon, he spent much of his youth moving around Northern California before settling in San Francisco. There he studied with the modernist pioneer of American Music, Henry Cowell, and, while still in his twenties, composed extensively for dance and percussion. He befriended another of Cowell's students, John Cage, and the two of them established the first concert series devoted to new music for percussion. They composed extensively for these concerts, including their still popular collaboration Double Music. In 1942, Harrison moved to Los Angeles to study with the famous Arnold Schoenberg at UCLA. Steeped in the atonal avant garde of Schoenberg's school, he moved to New York the following year, where he made a name for himself not only as a composer, but also as a critic under the tutelage of composer/writer Virgil Thomson. Harrison also worked at editing the scores of American composer Charles Ives and conducted the first performance of Ives's Third Symphony (which won Ives the Pulitzer Prize). Harrison also published a study of the music of atonal composer Carl Ruggles, and the influence of Ruggles and Schoenberg comes through in works such as Harrison's "Symphony on G" and his opera "Rapunzel." However, the stress and noise of New York led to a nervous breakdown in 1947. To help his friend recover, Cage recommended him to Black Mountain College in rural North Carolina, where the quiet and idyllic setting proved conducive to studies in Harrison's new interests, Asian music and tuning.

In 1953, he moved back to California and (then) rural Aptos, where he resided for the rest of his life. Despite his relative isolation from the music world, in the 1950s Harrison completed a remarkable set of works exploring new tunings and approaches to tonality, including his "Strict Songs" for just intonation orchestra and chorus. In 1961, he was invited to the East-West Music Encounter, a conference in Tokyo, which proved a leaping-off point for extensive studies of Asian music, first in Seoul, then in Taiwan. In the 1960s he created some of his best known works incorporating these influences, including "Pacifika Rondo" and "Young Caesar." In the last, an elaborate puppet opera, he used for the first time instruments designed and built by his new life-partner, Bill Colvig.

In 1975, Harrison met K.R.T. Wasitodiningrat, familiarly known as Pak Cokro, one of the great masters of the Javanese gamelan orchestra in that century. Pak Cokro not only instructed him in gamelan music, but also encouraged him to compose for the ensemble. Over the next ten years, Harrison would produce dozens of works for gamelan, often in combinations with Western instruments, such as Philemon and Baukis (violin and gamelan), Main Bersama-sama (horn and Sundanese gamelan), and Bubaran Robert (trumpet and gamelan). He and Colvig built various sets of gamelan instruments, including ensembles at colleges where Harrison taught at various times - Mills College, San Jose State University, and Cabrillo College. In the 1980s, with the rise of interest in the "new tonality" and world music, the world began to catch up with Lou Harrison, who by the time of his death was recorded on dozens of CDs and was the subject of many festivals and tributes. On his way to another festival in his honor in January 2003 in Ohio, Harrison suffered a heart attack and passed away at the age of 85. As a composer, artist, poet, calligraphist, peace activist, Lou Harrison dedicated his life to bringing beauty into the world, and those of us who remember his warm generosity, his integrity of spirit, and his irrepressible joyfulness, owe a great debt of gratitude that he did.